How To Install Roofing Felt 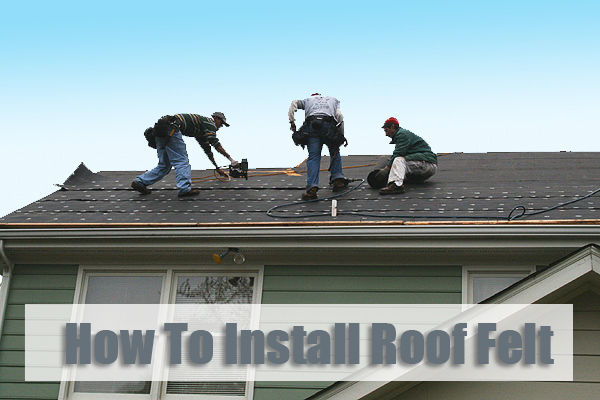 There are many steps included in installing a new roofing structure. It all begins with a solid decking foundation created from plywood or strand board. This plywood is not waterproof, which requires a waterproofing membrane called roofing felt, or also called tar paper. This paper forms with the plywood to create a barrier for moisture. The amount of waterfall in your area will determine the thickness of the moisture barrier.

Read More: How To Shingle A House Roof

Before laying your roof felt, add drip-edge flashing bending over the roof and down the facing board. Secure drip edge with a hammer and galvanized nails, one foot apart, before laying your felt.

Starting on the bottom corner, lay your roof felt and tack it secure on the corner straight with the end of roof. Bottom edge of felt roll should roll along the bottom of roof deck over drip edge. Roll out roughly 10 feet of felt at a time, securing with staples and mails with plastic washer heads. Fasteners should be added every 4-8 inches, leaving the top portion free.

Overlay a second layer 2-3 inches above the first layer. Continue along the roof, at the other end simply trim felt flush with a knife. Overlap the end of the felt roll roughly 3-5 inches when starting a new roll. Fasten both pieces of the overlapping felt to the roofing.

Cut around vent pipes or chimneys with a knife and secure felting around the object, also working the felt over metal flashing at the vents. Continue working up the roof, overlapping 3-4 inches over the roof peak and secure on each side. Apply these steps to the other side of roof, repeating the overlap at the peak of the roof.

Reggie Green is the founder of Elite Roofing and Consulting, a residential and commercial roofing contractor based in Dallas, Texas. A former insurance adjuster – licensed in 14 states, Reggie has made it his mission to bring honesty, integrity, and top notch customer service to the roofing industry. Reggie resides in Dallas with his wife and three daughters.